A Review of the EyeSpecial C-II Dental Camera by Shofu

I'm always looking for new, cool gizmos and gadgets to help clinicians get better dental images, so when I recently opened a dental magazine and saw a picture of the new Shofu EyeSpecial C-II by Shofu, and what it promised, I became very excited. I made sure that at my attendance at the American Association of Orthodontists meeting in New Orleans I would check out the camera.

I went to the Shofu booth and was allowed to handle and play around with the camera and I have to say, it delivers on everything it promises. It's light, easy to clean, easy to handle, gives more than adequate images and its program modes make most of the standard shots really easy. In short, a great camera. I could go on and on about how much I liked it and why I think it's a great camera, but then they told me about the suggested retail price and the love affair abruptly ended. They want $2795 for the camera. Yep, nearly $3000. Now, I'm not one to usually complain about price, but in my humble opinion, that's an almost obscene price to charge for a glorified point and shoot. 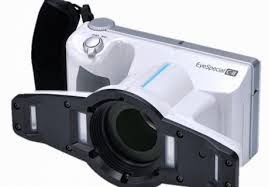 Sure, it has some great programming modes and it does things that I haven't seen any other point and shoot do, but spending $3000 on this camera, to me, just seemed about 2-3 times too much.

I tried to explain to the Shofu representative that at that price point, nobody is going to want to buy the camera. I tried to explain that the camera was far more expensive (yes, FAR more expensive) than a Nikon D7100, a Nikkor 85mm Micro lens and a wireless R1 flash, which gives far better pictures and is way more versatile. For users who want a simple camera to use, I couldn't find one reason to recommend this camera when you could buy a myriad of dental point and shoots for literally 1/4 the price.

I've dealt with thousands of dentists who've had questions about cameras. There are basically two types of dental photographers. Those who want to approach dentistry like artists and get the absolute best image they can and they would NEVER want to use this camera due to the lack of versatility (i.e.-different lenses, flash positions, etc). Then there are those who just want dental images. Nothing amazing, just simple documentation and that's it. Why would they drop $2795 on a camera? They wouldn't.

So, the EyeSpecial C-II is a great example of a fine product that simply costs too much. If the price ever gets cut in half, run out and get one, but until then, there are way better options for the money.

As a final example to drive home my point, I asked Shofu how they ever expected to sell this camera at their asking price. I literally implored the representative to better understand that there was no way this camera was ever going to sell a ton of units at that price. Though defensive, she proudly exclaimed that this camera was selling very well and that to date, they have sold a total of 100 cameras globally in a few months, a number that was much lower than I expected.

In the end, the market is going to decide whether the EyeSpecial is the right camera for dentistry, but for the reasons mentioned above, I simply can't get excited about it.